Development of Plum Canyon has gone on for many years and new construction continues to this day. The most recent include the Skyline community and new Toll Brothers neighborhoods called, Avalon, Mirabelle, Sierra and Victoria.

If interested in condo living, be sure to have a look at the Mariposa complex. There are also some terrific condos to be found in the Bordeaux neighborhood. Both complexes are well known condo communities in Santa Clarita and popular stops for prospective condo buyers.

Of course, it almost always comes down to location and Plum Canyon is no exception. Home prices are also impacted by current market conditions and a number of other factors. If interested, contact us for a full market report for this community. It's absolutely free and there's never any sales pressure whatsoever. Call 661-713-4799 or send us an email at info@gregoryrealestategroup.com

Similar to the HOA's, homes in some neighborhoods come with a Mello Roos tax and others do not. We offer important information about Mello Roos taxes and you can also find out if the home you are interested in has a Mello Roos.

Parents of grade school children enjoy having an elementary school directly within the community. Scroll down to learn more about the schools in Plum Canyon

Please complete the form and we'll respond soon. NOTE: We are not the HOA/property management company for any community or new development.
Contact Us About Plum Canyon

Plum Canyon is a bit different than other communities. Some neighborhoods come with an HOA while others do not. Some actually have 2 HOA's. There are a few neighborhoods with an HOA but amenities only include common area maintenance. Others include amenities such as swimming pools or recreation rooms. It varies from neighborhood to neighborhood. Be sure to scroll down to view the subdivisions section to find our more about each specific neighborhood.

The best recreational amenities will likely be found in the condo and townhome complexes such as the Mariposas or Bordeaux.

This brings to question the whole subject of HOA's. Some Plum Canyon homeowners like the idea of a HOA because it's proven to help maintain home values. Others prefer no HOA. Whatever your preference, it's all here in Plum Canyon.

Mello Roos
Many Plum Canyon homes and neighborhoods have a Mello Roos, but not all! Be sure to sure to inquire about the cost prior to making a purchase offer.

Residents enjoy easy access to local convenience shopping and dining at the new Skyline Ranch Plaza, located near the top of the community. There's a  Starbucks, Telly's and more.

New Plum Canyon Park
Plum Canyon Park is located near the bottom of the community. There's a covered picnic or party area, full basketball court, baseball diamond, plenty of greenbelt, restrooms and more. Since the park is brand new, it'll be a while until the trees mature enough to provide shade.

David March Park
March Park is smaller neighborhood park with parking, rest rooms, plenty of shade trees, a grass area and a nice playground for the little ones. There is an interesting March Family Bell in the park so it's certainly worth a visit, if only to see the memorial.

Plum Canyon Elementary School is centrally located directly within the community and we know Skyline Elementary is planned in the future. Nearby schools include the following:

Homes For Sale in the Plum Canyon Community

See below of homes for sale in Plum Canyon. Typically, the homes for sale here tend to be newer and if looking for brand new homes, they can be found as well.

Current Real Estate Listings in Plum Canyon
The listings below come from a live MLS feed displaying listings. Be sure to look closely at the listing status since some homes may be under contract. 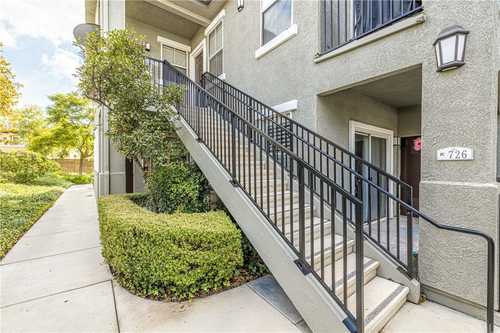 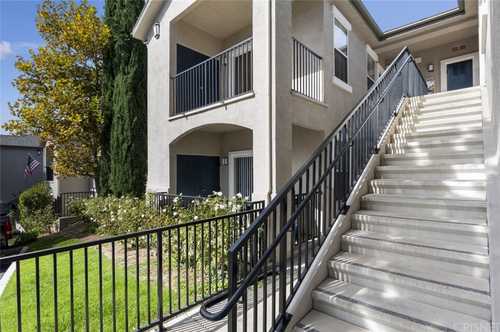 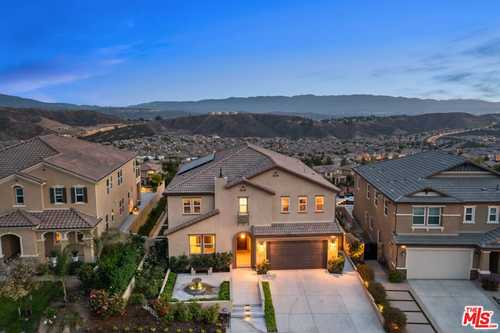 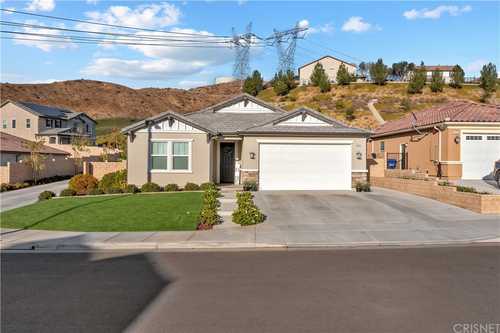 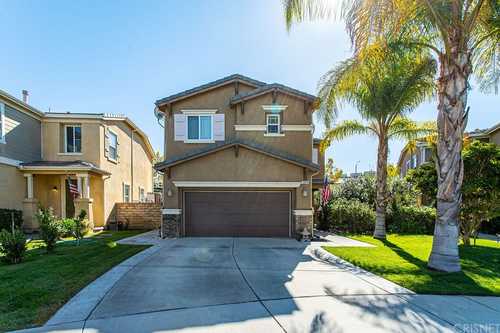 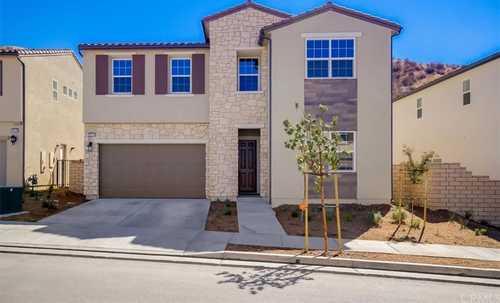 Can't Find the Home You Want?

If you don't find the home you like, have a look at more Saugus communities.

If you are interested in buying or selling a home here in Plum Canyon we're happy to help. Call or text Matt & Meray Gregory at 661-713-4799.

More Homes in Saugus of Santa Clarita
View Homes For Sale in ALL of Saugus.

Subdivisions and Homes in Plum Canyon

Blackberry Briar: A mix of 3, 4 & 5 bedroom homes built around 2007. Yes, there is a moderately priced HOA but that covers the common areas only. There are no community amenities.

Bordeaux: A gated facility with 1 and 2 bedroom condos and townhomes built in 2001. Of course there's a HOA and the amenities include a clubhouse, gym, pool, spa, outdoor fireplace, barbecue and more.

Bouquet Country: This subdivision is actually situated in one of the other neighborhoods so there really isn't anything specific to mention.

Canyon Crest: Includes a small number of 4 Bedroom houses approximately sized from 1,925 to 2,978 sq ft. Most homes were built from around 2019. No Mello Roos and low HOA!

Madison (St Claire): Mostly 4 bedroom homes built in 2003 and 2004. The St. Clare HOA is very reasonable and come with amenities such as a pool, hot tub, fire pit, barbecue, outdoor cooking and a playground.

Citrus Grove: Built in 2006 neighborhood includes a mix of 3 & 4 bedroom condos & houses. There are 2 HOA's but the neighborhood comes with amenities including a pool, hot tub and a playground.

Cottage Glen: Generally includes homes with 3 or 4 bedrooms built from 1993 to 1998. There is no HOA but you'll need to verify if there is a Mello Roos.

Custom Plum Canyon: A variety of custom style homes of all sizes built from 2007 to 2018. These homes are not in a specific area and are situated throughout the community.

Heatherton: Developed from 2011 to around 2014, this subdivision includes a nice mix of mostly larger, 5 bedroom homes sized from 2,097 up to 3,072 sq ft. VERY Nice! There is no Mello Roos but there is at least one HOA. Amenities include a pool, spa and a clubhouse. Be sure to verify the number of HOA's.

Mariposa Neighborhood: Lots of condos & townhomes with 2 or 3 bedrooms. This is a very popular
neighborhood, built in 2005 and 2006. Amenities include a pool, hot tub, barbecue, playground, clubhouse & the HOA cost is reasonable. Learn more about the Mariposa condo complex.

Montage: Good sized 4 and 5 bedroom homes built in 2006. There are two HOA's and amenities include a pool and hot tub and more. No Mello Roos but be sure to VERIFY!

Orchards: Small mix of 4 & 5 bedroom homes mixed in with the Wood Crest subdivision. Built in early 2000's. No Mello Roos and No HOA.

Stone Creek: 3 and 4 bedroom homes developed in the early 2000's. NO HOA and No Mello Roos.

Strawberry Fields: 3 and 4 bedroom houses built from 2006 to 2007. Yes, there is a Mello Roos and HOA. Other than common area upkeep, there are no amenities.

Van Daele at Plum Canyon: 4 bedroom houses built around 2017. This small neighborhood is also a part of the St Clare HOA and the amenities are quite nice! Low HOA cost. No Mello Roos but always verify.

Skyline Neighborhoods
The Skyline community is terrific and include outstanding amenities. In fact, during ourpast visits we all felt the amenities are some of the very best in all of Santa Clarita! There are currently 5 Skyline neighborhoods but more are planned in the future.

Toll Bros Neighborhoods
Learn more about the 4 new neighborhoods built by Toll Brothers in Plum Canyon. Mirabelle and Avalon are complete and as of early 2021 development of Sierra and Victoria is in progress.

Based on information from California Regional Multiple Listing Service, Inc. as of October 27, 2021 3:10PM and/or other sources. All data, including all measurements and calculations of area, is obtained from various sources and has not been, and will not be, verified by broker or MLS. All information should be independently reviewed and verified for accuracy. Properties may or may not be listed by the office/agent presenting the information.